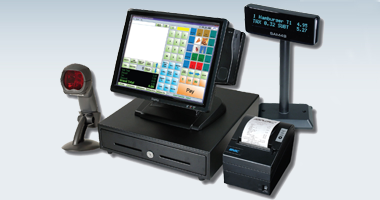 We offer terminals and integrated solutions with excellent support, quality and pricing. Save on merchant processing rates and fees. SAVE on EMV Terminals and Integrated Hardware. 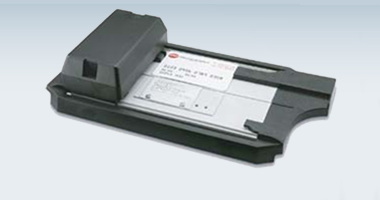 EMV, an acronym of Europay International, Mastercard and Visa, joined in 1994 to provide a worldwide standard for the interaction between chip-based "smart-cards" and approved payment devices. 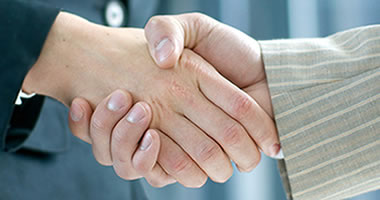 The cost of Payment Card Industry Data Security Standard (PCI DSS) compliance is vastly underestimated—but maybe not as understated as the tangible and intangible costs of a data breach.

TAP, PAY & SAVE: Tap your phone to an NFC terminal at checkout and use any credit or debit card you want with your iphone or Google Wallet app. 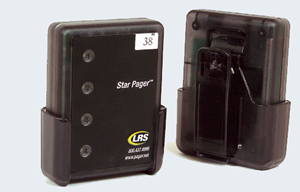 The Service Pager from LRS is the only on-site pager to feature wireless programmability. This enables the user to easily change the number of any pager from the transmitter at their location. This feature is ideal for servers in restaurants eliminating the need for grease pencils and white boards. It is also the only rechargeable pager that utilizes a pager cradle instead of an attached belt clip. The pager cradle minimizes breakage limiting service costs and repair fees. 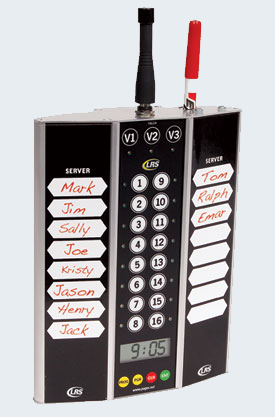 Use the Drop Down Menu to select your "Server Kit". 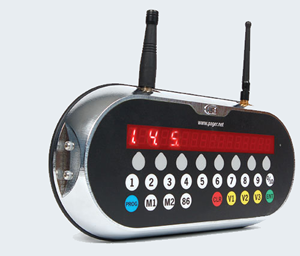 Our new wireless server paging systems are the smartest server pagers on the market. They let your servers spend more time with guests instead of waiting in the kitchen for orders.

When an order is ready, the kitchen staff simply presses one or two buttons on our transmitters and it pages the server so they can pick it up. It’s that simple. There’s no name lookup or shift change to worry about. And, since servers spend more time on the floor, you get faster table turns and higher check averages.

Our transmitters work with all three LRS server pagers. Each transmitter offers wireless programmability so facilities can renumber pagers on site. They have capacitive touch sensors so there are no buttons to wear out. One, two and three pager vibrations can signal servers where to go or you can send text messages to an LRS alphanumeric pager. There’s no name lookup or shift change to worry about because the correct server is paged every time.

The T9100 Series is the premier server paging transmitter line and offers features like: built-in clock, manager paging and wireless programming of pager numbers. The T9100 Series eliminates the need for any grease pencils or white boards by offering wireless programming. For example, when a server comes in for their shift, they grab a pager and program it to their server number. When the order is printed in the kitchen, the chef pages that server number. There is no name lookup or shift change to worry about. All T9100 server paging transmitters are constructed of brushed stainless steel and come with multiple mounting options making them the easiest to install.

Use the Drop Down Menu to select your "Server Kit".